Analysis by Liverpool BID Company, which represents more than 1,000 businesses in the city centre, shows total footfall between 8am and 9am on weekdays in August was 125,324. In September this had risen to 149,435.

The biggest rise came on Monday mornings suggesting that Monday’s appear to be the day that people are returning to the office more than other days. September’s total is also a 19% increase on July’s, where footfall during the same hour was 125,324.

BID suggest the increase demonstrates a return to morning commuting and a regular office routine. Some firms are offering a hybrid working model. In August LBN revealed accountancy firm DSG was asking its 85 Liverpool staff members to come into the office for three days a week, allowing them to work from home for two days.

Julie Johnson, business operations partner at Morecrofts Solicitors and acting chair of culture and commerce BID, says while people are returning to desks, it is a more flexible model that is being adopted by many firms.

‘We are seeing businesses returning to their offices but we knew this would be a gradual process,’ she explained. ‘Flexibility and a hybrid offer has been a core message from many businesses as they look to navigate the new normal. The confidence shown in the commercial district illustrates it is still a major draw, and Liverpool is perfectly placed for those looking for a flexible option’.

There are developments that will see an increase in the number of office workers in the city centre. There will eventually be around 4,500 HMRC staff located in India Buildings in Water Street following an £11m refurbishment.

Martin’s Bank Building, one of the most stunning in the city, has been purchased by Kinrise. It will undertake a multi-million pound refurbishment of the 210,000 sq ft building to create new flexible workspaces.

The company will keep the ground floor public with a space for exhibitions, events and a cafe. Sam Lawson Johnston, co-founder of Kinrise, said:

‘Liverpool is a richly diverse and vibrant city and we have been looking for a site here for a number of years. Martins Bank Building in the city’s commercial centre meets all the requirements we look for in a building; central location, an abundance of character, great natural light and volume of space – it is the perfect addition to our portfolio’. 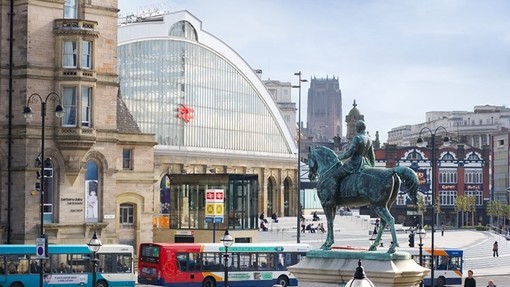 ​Following the collapse of the main contractor on the £9m Lime Street upgrade, Liverpool Mayor Joanne Anderson agreed to a review of the scheme – but major changes are unlikely.